What goes into designing a race suit? How the new Ski Team Sweden Alpine and Skicross race suits were born

Technical performance is of the utmost importance in a race suit. But so is empowering the athlete, boosting their self-confidence and making them feel like a winner. So how do you approach the task of designing such a suit? We asked Huski Wear star designer Jonas Olsson, who has been given the honourable task of designing the new Ski Team Sweden Alpine and Skicross race suits.

What has been most important when designing the new Ski Team Sweden race suit?

That the athletes and the Swedish Ski Association liked the design. That was essential!

We also wanted a more clean-cut look for the 2021/2022 Ski Team Sweden race suit, compared to previous suits. We wanted the sponsors’ logotypes – including our own – to stand out and be clearly visible since it’s one of the most important criteria, really.

“The biggest differences are the fit and two-piece verses one-piece.”

You have created race suits for both the Swedish alpine team and the Swedish skicross team – has the design process been different between the two suits?

The biggest differences are the fit and two-piece versus one-piece. The alpine suit is a tight-fitting one-piece suit, while the skicross suit has to be a more loose-fitting two-piece suit. Those are the FIS rules! But that doesn’t make too much of a difference when I’m designing. This year, we chose to do the same look and feel for both alpine and skicross.

Was it important to use blue and yellow, the Swedish colours?

Yes, it was very important – especially to the Swedish Ski Association and to the skiers. They’ve had some gear in other colours in the past, and it wasn’t that popular. They’re proud to represent Sweden and want everyone to be able to see that that’s where they’re from.

The colours of the new race suit are different shades of blue with a golden-beige SWE country code, accentuating the Swedish – but with a bit of a twist!

Fun fact! Only three other countries in the world use blue and yellow as signature colours, Kazakhstan, Palau and Ukraine. Blue and yellow have been used as Swedish colours at least since 1275, when they first appeared in the royal coat of arms. 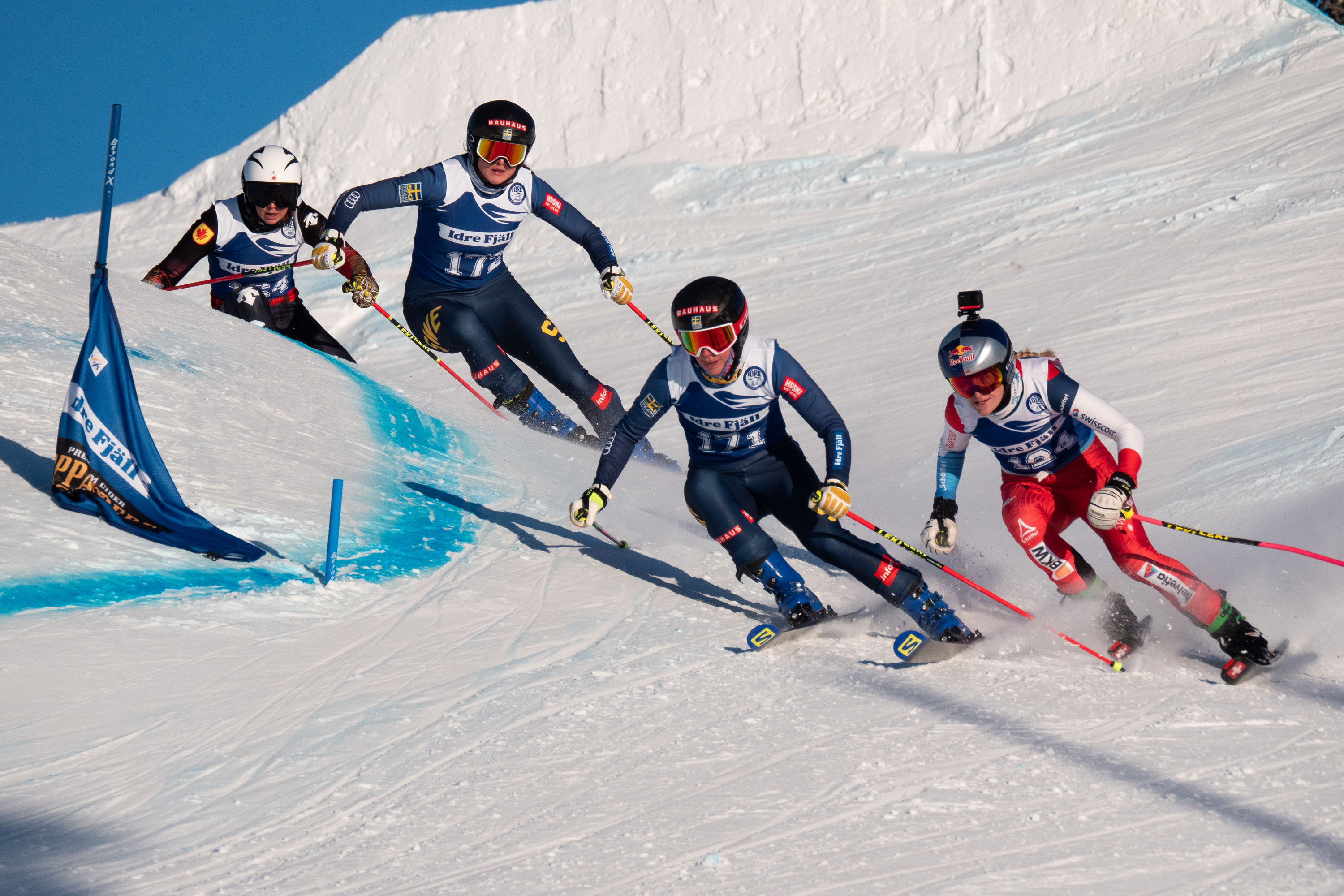 What rules do you have to follow when designing a competition suit? Are there rules for materials, colours, details and so on?

With a competition suit there are rules for practically everything, except colours, any patterns and graphics, like the name of the country. You’re only allowed to cover a limited area of the suit with sponsor logos and you also have to consider that the entire torso will be covered by the numbered bib. So you have to find ways to be creative within those limits.

What has the collaboration with the skiers been like? Did they have a lot of input?

We came up with a first idea and after going back and forth a few times, we were done. I feel like we understood each other from the get go. It’s been a very smooth collaboration overall!

What previous experiences have you incorporated in the design process for this race suit, as a designer and as a skier?

To keep it simple! Why complicate things if it’s not necessary, right?